The Freedom Tour in Manchester 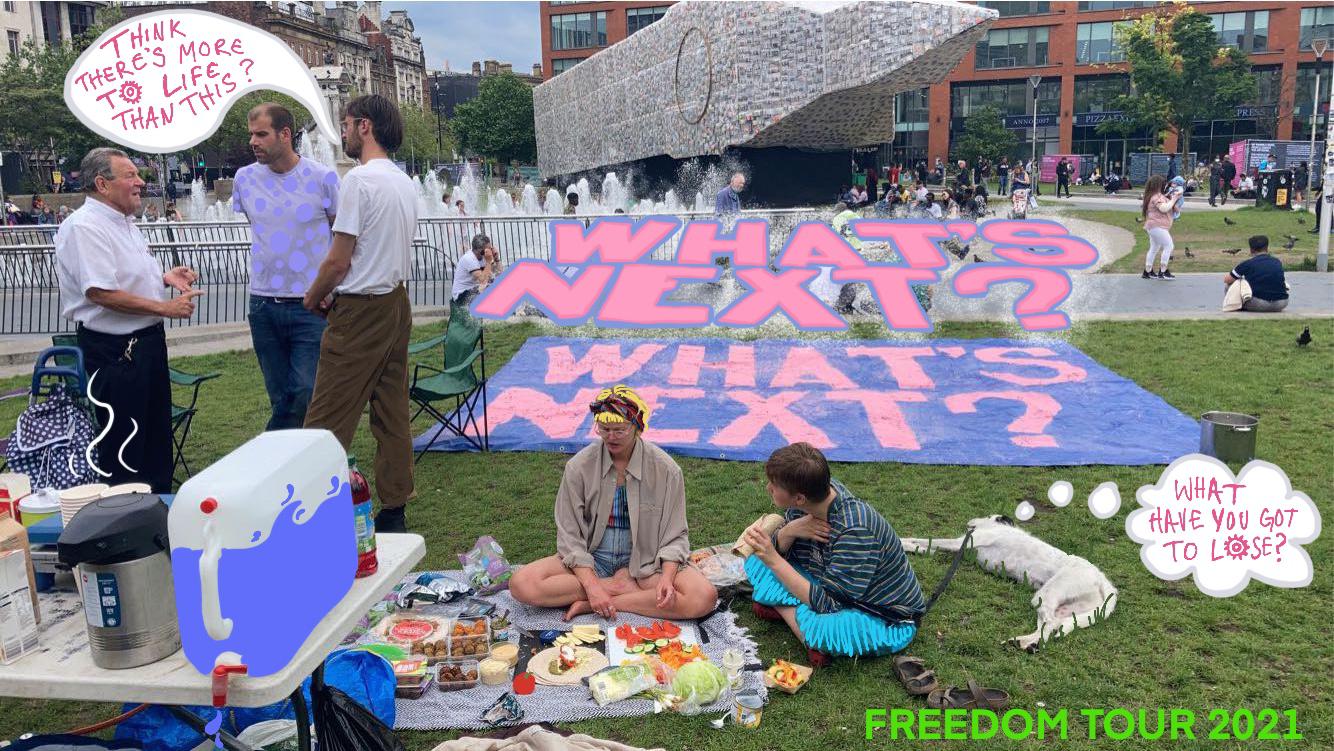 Ryebank fields is a beautiful wild area enjoyed (and lived in!) by many beings which is under threat of development and the protection camp warmly invited us to make our own bubble of a camp, navigating needs and covid safety. Gratitude to the humans taking a stand for the land, plants and creatures that inhabit Ryebank.

Being in a big city, with so many options to consider, we collectively decided to spend a day in Piccadilly Gardens in the centre, having conversations and culminating in a Crisis Talk - a Big Chat rebranded.

We were instantly met with challenges that became apparent throughout the day we weren’t alone in experiencing. Street harassment, and the council questioning the validity of our presence in the park with our camp kitchen (apparently you can get fined for feeding the homeless!). This was all handled deftly by our collective, bringing us together and in itself offering new ways of navigating through challenges when they are faced as a community rather than as individuals.

Once we got set up we were in the park for the rest of the day, serving tea, coffee & biscuits and having conversations. Our focus was shifting to the crises we face and what would it take for us to stand in defiance for what we care deeply about. People were engaged and keen to connect to wider movements, with many people signing up to hear more. Our youngest tour member co-held the kitchen fort, pulling together a massive pot of delicious veggie pasta pesto (2 pots actually to encompass some dietary needs!) which we dished out as we got together for the Crisis Talk.

We were up against the intensity of the environment, more groups of folks were beginning to drink around the park and the fountain & general hubbub noise had been going strong all day but a diverse group of people came together to share and listen to what they saw going on in the world around them. The people we met in Manchester talked a lot about how the education system is failing young people. The pressures it’s putting on kids to achieve results and the narrow way it has of defining intelligence is contributing to a mental health crisis.

One guy, who’d described growing up traumatised through the care system, left the assembly saying how good it felt to have a voice. We’ve stayed in touch with him and he’s spreading the word about the Freedom Tour throughout Manchester still.

Once we were packed up we blasted out Basement Jaxx Where’s your head at? and boogied out what was left of our energy for the day before heading back to camp for a well-deserved rest!

The rest of the weekend had us swimming in a glorious lake, chatting to folk at the Ryebank skillshare, some of our members gave a talk on Insulate Britain, and attending talks & music there. whilst some folk headed home, the football didn’t, so we rounded off the night with a street party - shout out to folk that joined us to dance away the defeat!